Link to this page

Hendrick ter Brugghen, or Terbrugghen, (1588 - Nov 1, 1629) was a Dutch painter, and a leading member of the Dutch followers of Caravaggio - the so-called Dutch Caravaggisti.

Dutch painter, one of the earliest and finest exponents of Caravaggism in northern Europe. Born into a Catholic family, he grew up in Utrecht, studied there with Bloemaert, then spent about a decade in Rome (c. 1604-1614). On his return to the Netherlands he became with Honthorst the leader of Caravaggism associated with the Utrecht school. A second journey to Italy (c. 1620) has been postulated, as his later works are generally more thoroughly Caravaggesque than his earlier ones.

Terbrugghen was chiefly a religious painter, but he also produced some remarkable genre works, notably a pair of Flute Players (Staatliche Kunstsammlungen, Kassel, 1621), which in their subtle tonality - with dark figures placed against a light background - anticipated by a generation the achievement of painters of the Delft school such as Fabritius and Vermeer.

Although he was praised by Rubens, who visited Utrecht in 1627, Terbrugghen was neglected by 18th- and 19th-century collectors and historians. The rediscovery of his sensitive and poetic paintings has been part of the reappraisal of Caravaggesque art during the 20th century. (From Web Gallary of Art) 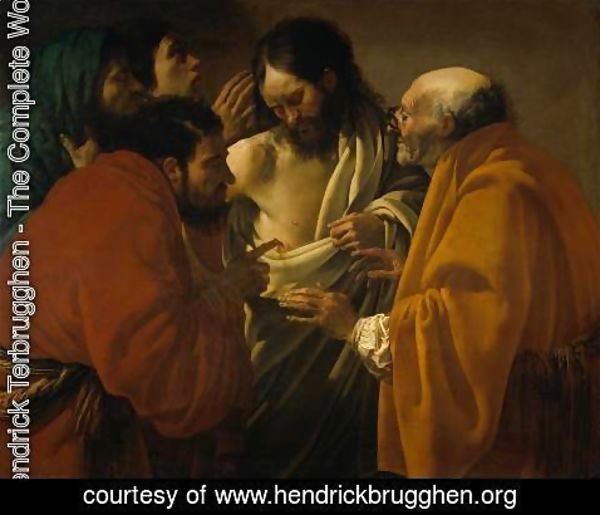 Little is known of the early life of ter Brugghen; he could have been born in The Hague, but his family seems to have moved to the strongly Catholic Utrecht in the early 1590s. Here he started painting at the age of thirteen, studying with Abraham Bloemaert. From Bloemaert, a Mannerist history painter, he learned the basics of the art. Around 1604, however, ter Brugghen travelled to Italy to expand his skills, a rather unusual move for Dutch painters at the time. He was in Rome in 1604, and could therefore have been in direct contact with Caravaggio (who fled the city in 1606 on a murder charge). He certainly studied his work, as well as that of his followers - the Italian Caravaggisti - such as Orazio Gentileschi. Caravaggio's work had caused quite a sensation in Italy. His paintings were characteristic for their bold chiaroscuro technique - the contrast produced by clear, bright surfaces alongside sombre, dark sections - but also for the social realism of the subjects, sometimes charming, sometimes shocking or downright vulgar. Other Italian painters who had an influence on ter Brugghen during his stay in Italy were Annibale Carracci, Domenichino and Guido Reni. ter Brugghen died in Utrecht in 1629. 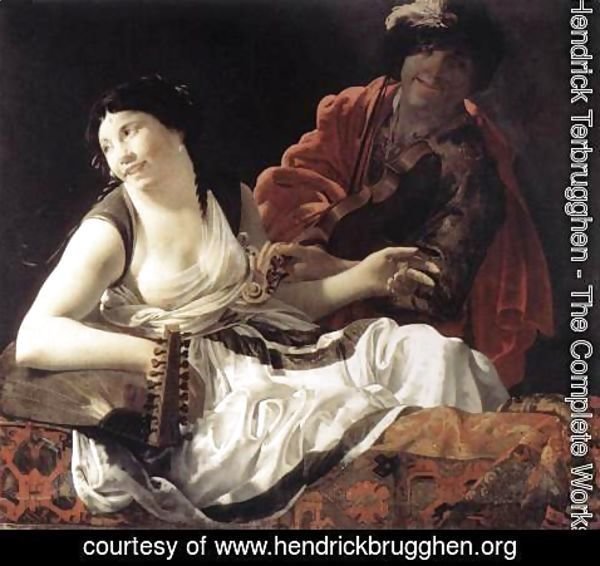 Upon returning to Utrecht, he worked with Gerrit van Honthorst, another of the Dutch Caravaggisti. Ter Brugghen's favourite subjects were half-length figures of drinkers or musicians, but he also produced larger-scale religious images and group portraits. He carried with him Caravaggio's influence, and his paintings have a strong dramatic use of light and shadow, as well as emotionally charged subjects. Even though he died young, his work was well received and had great influence on others. His treatment of religious subjects can be seen reflected in the work of Rembrandt, and elements of his style can also be found in the paintings of Frans Hals and Johannes Vermeer. Peter Paul Rubens described ter Brugghen's work as "...above that of all the other Utrecht artists." (From wikipedia)

Report an error on this page